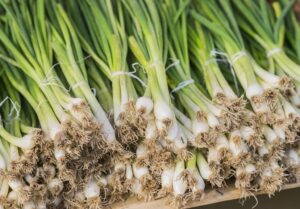 Chives and green onions look very similar. Appearance can be deceiving, and so in this case as well, you might use chives instead of green onions or vice versa.

We have prepared a depth study about chives vs green onions so that you can easily differentiate between the two without any problem.

Chives are herbs that are grown in the house as decoration. However, they are also edible and can be used as an ingredient with various dishes. Chives are herbaceous plants that are perennial, which means that they grow throughout the year.

Now that you have learned what chives are let us see what chives taste like and their actual use in our daily lives.

Chives have an onion-like taste. This is also another reason why people get confused with them. The taste of chive is very similar to leeks.

Chives belong to the allium family and thus have close relations with other species of the same family. This is one reason why it taste’s so similar and looks similar to a green onion.

Chives taste similar to onion; however, they do not have the deep taste like onion. In addition to that, they also do not leave behind onion breath in your mouth. This makes them an indel substitute for Onions in some cases.

When Should You Use Chives?

Chives have various use. The most common one is cooking. Chives are used in cooking.

Chives are used when the cook wants to flavor the food but do not want to add too many ingredients for flavor. Chives can provide optimum flavor when used in fewer quantities.

Apart from that, they blend well in the dish and do not stand out.

Chives can also be used as toppings or garnish in various cases. You can sprinkle chives over the dish to make it look better and taste better.

The main feature of the green onion is that it does not have a mature bulb. The bulb is not fully developed in green spring onion, and this separates it from a normal onion.

They instead have green eaves growing from an undeveloped bud. The leaves are edible, and these are used while making food.

The plant is native to the far east side of Europe, and however, nowadays, it is grown everywhere. Green onions are popular, and they are used all over the world for dishes. There are many uses of green onions, which we will see further, but first, let us see how the green onions taste like.

Green onions have two-part. These are the underdeveloped bud and the green leaves emerging from the bud. Both parts are edible and are eaten all over the world. The bud part has an onion-like flavor with an inch of sweetness. On the other hand, the leaves have an onion-like flavor, but they have a pungent smell.

When Do You Use Green Onions?

Green onions can be eaten raw as well as cooked. This makes it easier to use.

Cooked green onion has greater use, and they are used in a wider variety of dishes. The onion-like flavor of green onions makes them an ideal ingredient in various dishes.

Scallions or green onions are widely used in Japanese dishes. They are used in almost every Japanese dish, from soups to ramen.

Above, we have mentioned chives vs. green onions difference in brief. Now, we will tell you about these differences in detail so that you can easily differentiate between chives and green onions in the future.

Let start with the difference between chives and green onions .

The bulb in the green onion is small and underdeveloped. It is mostly unnoticed since it is very small.

Chives, too, belong to the allium family and are close to the onion. However, they have a mild taste as compare to the green onion. They taste like onions; however, that is to some less extent. Chives have more garlic-like flavor.

Chives have onion flavor, and that’s why they are added to some dishes to provide onion taste without using onions .

Chives are used for garnishing purposes mainly. Sometimes, they are also used to provide onion flavor to the food. Since chives have a similar taste to that of onion, they are a good replacement for onions.

However, the taste intensity of chives is lower than that of onions. Chives are used raw, and they are used as garnishing agents. Many dishes across the world use chives as toppings.

Green onions have a mild onion-like flavor, and they are used for both garnishing and cooking. Unlike chives, green onions do not lose their flavor upon cooking.

In addition to this, they also have a mild onion-like taste. This all makes them an ideal food ingredient. Green onions are used in various dishes all over the world.

Green onions also go well in their raw form. They are used as toppings or garnishing. In many parts of the work, they are added in last to improve the appearance of the food and also to increase the taste.

Chives and green onions are of different nutritional value. Let’s discuss them one by one .

Chives have a lower calorie compared to green onions per cup. Chives are high in fat and protein. Apart from that, they are a great source of vitamins and minerals. Chives provide vitamin A, Vitamin C, Calcium, and magnesium to the body. Chives are a great source of vitamin K, and they provide 250% more vitamin K to your body than your daily needs.

Chives are good for your health, and man health experts recommend them all over the world. Pregnant women are asked to eat chives as it helps to provide all the nutrients necessary for their good health.

Also Read : How Long Does Cooked Shrimp Last In The Fridge?

How to Store Green Onions and Chives

However, it would be best if you were careful about certain things before storing the chives. First, you need to make sure that while packing chives, they are not moist.

Moist chives mold faster than dry chives, and so you must pack them carefully. If possible, use a vacuum bag or airtight bag to store chives.

Green onions can be stored in the refrigerator for 5 days .

However, you can increase the lifespan of green onions by storing them in a jar with some water filled in it. This will increase the storage time for green onions, and they could be store for about one week easily.

Green onions must not be stored in an airtight bag since they need air to stay fresh.

They can wilt quickly if you store them in an airtight container or bag.

Related Post : How Long Does Cooked Broccoli Last in The Fridge?

Even a great cook can get confused between green onions and chives. However, after reading this article about chives vs green onions, you now know all the difference between chives and green onions. You can easily differentiate between the two without any problem.