Can you use sour cream as a substitute for Yogurt?

Your kid doesn’t love Yogurt? or do you have an allergic issue with having Yogurt in any meal?

Please don’t be frustrated, and there is also a way to get rid of it. You can use sour cream here as a substitute for Yogurt. It has some health benefits too, and good for immunity. 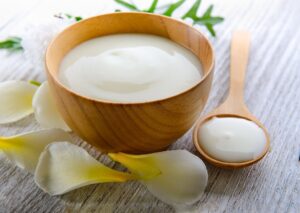 So, as a healthier substitute for Yogurt, Sour cream can be easily considered in place of Yogurt.

Keep scrolling to know more about using a sour cream substitute for Yogurt.

Can You Use Sour Cream as a Substitute for Yogurt?

Sour cream is prepared while lactic acid is being added to milk cream. It makes the crème dense, sour, and a little bit creamy. It tastes tangy but contains fats also. The lactic acid is the reason behind this sour flavor.

It offers versatility as an ingredient in any recipe. It is ideal to be used in both sweet and delightful recipes and fried dishes and baked goods.

It is used as a traditional topping and a key ingredient in desserts, pieces of bread to add richness and moisture.

Also, perfect for sauces, dips, and even frosting by mixing up powdered sugar.

Sometimes, it is used in the cake making process and delicate meat dishes. But it comprises of fats which are not ideal for a healthy diet.

So, the people who don’t want to intake fats can avoid sour cream and use another healthier substitute of sour cream.

Substitution of Yogurt and Sour Cream

When you are going to substitute sour cream for Yogurt, keep one thing in your mind. You have to take the same amount of both items. Not a difficult process to do. 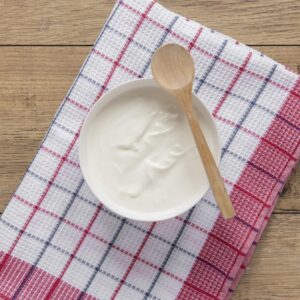 So, you can also be able to adjust the tanginess of your food using sour cream.

Here are few sour cream substitutes for Yogurt in the following:

There are plenty of ingredients to be used instead of sour cream. If you are running out of sour cream and want a quick solution, you can use some of what you already have in your fridge.

By the way, please don’t wait for the unhealthy sour creams available in the market; you can make it your own, take buttermilk and heavy cream and mix it to prepare your sour cream.

There can be two kinds of sour cream. One is dairy-based substitutes, and another is dairy-free substitutes. Plain Yogurt, buttermilk, cream cheese can be considered in this category.

Plain Yogurt You can say the best replacement for sour cream is Yogurt. Substitute sour cream with an equivalent amount of plain Yogurt, mentioned in the recipe.

You won’t find any considerable difference in its texture and flavor when you deal with baked goods.

But you may find sour cream substitute yogurt, including dips or topping slightly tangy than the regular flavor.

You can also use whole milk yogurt and Greek Yogurt as sour cream substitutes. It can make the best substitutes of sour cream as these products offer more consistency than fat-free Yogurt.

Otherwise, any plain Yogurt can give you the best result.

If you want to take sour cream alternative in a baking recipe, add one cup of Yogurt with one teaspoon baking soda, and let’s see the result.

While you will prepare a dip, ensure that you are using Greek Yogurt instead of regular Yogurt. As it will give you a thicker version of Yogurt.

You can even make the recipe of sauce with the help of Yogurt, take 1 cup of Yogurt and add one tablespoon flour to it. Finally, add two teaspoons of water to produce 1 cup of sour cream.

Cottage Cheese and cream cheese’s flavors are quite the same but distinct by sour cream textures.

So, the best way to use these creams as a sour cream substitute is to mix with other ingredients, including some liquid.

You will get the same consistency as sour cream and remove the cheese from the curds.

To prepare a low-fat substitute for sour cream, add one tablespoon lemon juice to 1 cup of cottage cheese without low-fat. Also, add two tablespoons skim milk and whip cream to and blend it until it becomes smooth.

If you want to prepare a dip substitute of sour cream, blend 1 cup cottage cheese with 1/4 cup of buttermilk or Yogurt.

There is also another way to serve cream cheese in a dip in place of sour cream. You have to add three tablespoons of milk with 6 ounces (3/4 cup) cream cheese and blend and stir it to achieve the correct consistency of this food item.

Buttermilk is the next best ingredient to substitute sour cream on any recipe, but it is not as thick as sour cream, a thinner consistency you will find.

If you add some butter to soften the texture, then you can get a better result. In case you are baking, we will suggest you use 3/4 cup buttermilk with 1/3 cup of softened unsalted butter for one cup of sour cream in every recipe.

It can be seen slightly thinner, but it allows baking finely.

If you want to make a sauce, such as spinach artichoke, you can substitute up to half of the sour cream with buttermilk.

But don’t worry that you are using sour milk. It doesn’t mean your battery will give a thin consistency.

Here, you can add mayonnaise, cream cheese, or Yogurt to thicken the batter. The flavor of buttermilk is quite similar to sour milk. That’s why it is called for a sour cream substitute.

Evaporated milk is unsweetened condensed milk. It is evaporated because it evaporates around 60 percent of water from the mixture, producing milk with a thicker consistency.

But be sure that you have to use unsweetened evaporated milk, not the sweetened condensed milk, because to make it sweet, sugar is added to this milk.

If you want a lower-fat alternative to sour cream, then add one teaspoon lemon juice to one can of cold evaporated milk.

If you want to cook sauces, blend one cup of evaporated milk with one tablespoon of lemon juice or vinegar. Keep the mixture at the average temperature for 5 minutes to be thickened.

Dairy-free products are challenging to match as sour cream substitutes for Yogurt as their flavors are different. Non-dairy substitutes are not close in the tasting, but there are few products on the market that can help you to replace sour cream easily.

Vegan Yogurt can be an excellent substitute for sour cream in the same manner as dairy yogurt. It is an easy recipe; you can also prepare it in your home.

To make vegan Yogurt, you will be required water, nuts, and lemon juice. Take the mixture and ferment it for a couple of hours. Then make it cool in the refrigerator.

Now replace it in the same method as in plain or regular Yogurt as a sour cream substitute.

You can also go for the alternate process, combine one cup of tofu with a 1/2 tablespoon of lemon juice, and add a little salt for the authentic flavor.

Now add adequate water until you are getting the mixture that meets the consistency of sour cream. It can be substituted with one cup of sour cream.

To make the vegan lifestyle easier, plenty of dairy-free sour cream substitutes are available in the market.

We can recommend you one of the right commercial brands of vegan sour cream here, and it is “Tofutti Better Than Sour Cream”.

This sour cream offers the same taste as the real one, without adding any heavy ingredient to make it thicker.

Most of the dairy products add extra material to make it as thick as Vegan sour cream. Hence, it is resulting in a better sour cream substitute.

However, you can make it on your own. To make the vegan sour cream, mix soy milk, soy yogurt, lemon juice, and corn-starch. Before using the mixture, take it out and cool it at the average temperature.

Mayonnaise is counted as one of the generous sour cream substitutes as it can be used both in cookies and in dips as a 1:1 ratio. It indicates that one cup of mayonnaise is equivalent to one cup of sour cream.

But you will miss some of the tangy flavors offered by sour cream. However, it does a wonderful job of delivering moist baked goods.

Additionally, it offers a similar flavor as sour cream, making it a great substitute in dips and sauce. To make it tangier, add Yogurt and mayonnaise together and prepare the plunge to be served.

I hope you can get some great options like sour cream substitutes for Yogurt. Choose your option and use a healthy substitute to replace sour cream in any recipe.