The letter “D” is the first letter in the word “delicious.” While you may not realize it, many of the delicious food that you eat are foods that start with d. You will be dumbfounded to learn on how much of this food is stuff that you consume on a daily basis. Foods beginning with d can range from the common doughnut to the gourmet dish duck comfit.

Initially, it may be a challenge to come up with food that starts with the letter d. It may seem to be a big brainteaser but it is simpler than you think.

Today, we will discuss the Top 20 Foods that Start with D.

Top 20 Foods that Start with D 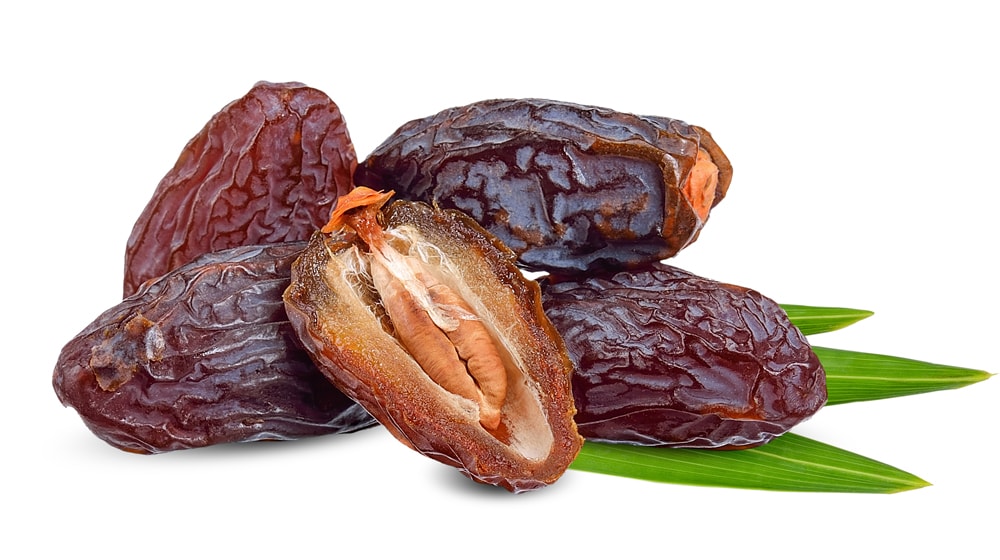 Fruits that Starts with D

Dewberries are fruits that are related to blackberries and are aggregated fruits similar to raspberries.

They are rich in Vitamin A and Vitamin C. They also contain trace minerals such as calcium and iron. As an added bonus, they also have electrolytes potassium and sodium.

They can be found in Northern America and Northern Europe. Dewberries are used for cakes, cobblers, muffins, jams, pies, salads, and teas.

Dates are rich in Pyridoxine but not much else in terms of Vitamins. They also contain trace minerals such as magnesium, manganese, phosphorus, selenium, and zinc. They also have antioxidants such as carotenoids, phenolic acid, and flavonoids. As an added bonus, they also have electrolytes potassium and sodium.

Dates are very versatile and can be used in a variety of foods such as smoothies, bread, tarts, salads, soups, and syrups.

The durian is perhaps among the strongest smelling fruits that start with d.

If you can get past the strong smell, you will be rewarded with sweet and succulent fruit that has yellow or red flesh.

Durian production is concentrated in Malaysia, Singapore, Thailand, Indonesia, and the Philippines.

The durian is rich in Vitamin A and Vitamin C as well as Thiamine, Riboflavin, Niacin, Pantothenic acid, and Folate. It also contains trace minerals such as calcium, copper, iron, magnesium, manganese, phosphorus, and zinc. As an added bonus, they also have electrolytes potassium and sodium.

Dragon fruit is a pinkish fruit with green scales and a succulent white flesh with edible black seeds.

It is rich in Vitamin C, protein, and fiber as well as trace minerals such as iron and magnesium. It also contains antioxidants such as betalains, hydroxycinnamates, and flavonoids. As an added bonus, they also have electrolytes potassium and sodium.

Meats that Starts with D 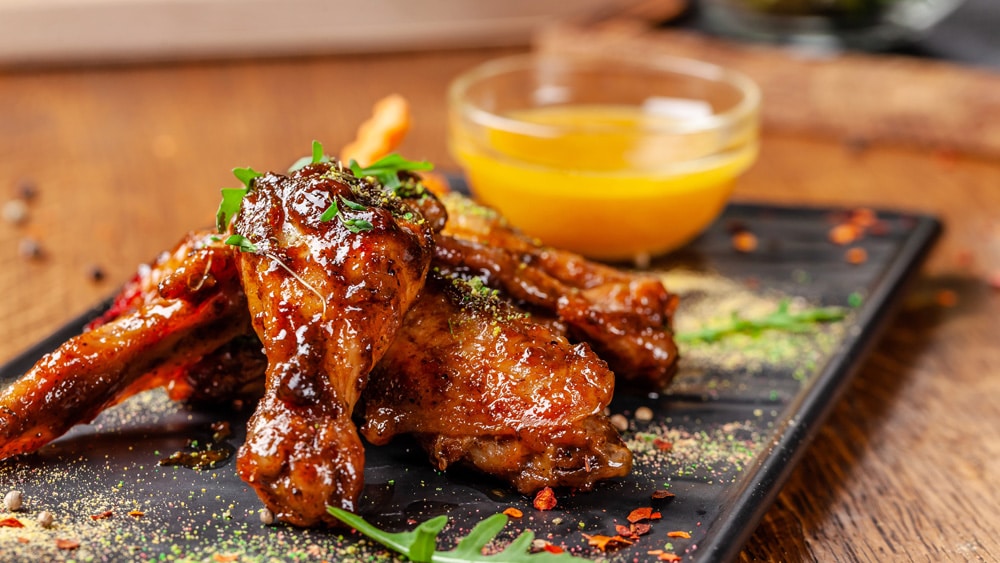 The drumstick is the bottom part of the leg of a bird. The most common drumsticks are those chicken, turkey, and duck as these are domesticated and farm-raised.

Drumsticks, breasts, and wings are among the most valuable parts of a bird. They are very versatile as they can be deep-fried in batter, roasted, baked, grilled, and barbecued.

This dark meat can also be incorporated into curries, stews, and soups. The gamey dark meat has a lot of fat and fat equals flavor.

Doves are not your standard fare. Unlike chicken and turkey, you cannot just waltz in a market or supermarket and buy them. You have to actually exert effort and hunt them in the wild.

Many people who have tasted dove say that it tastes like a mild duck. The meat is gamey and low in fat. It is not as tender as your average domesticated bird as doves get a lot of exercises and are just not cooped up in cages or pens.

These small birds can be grilled, barbecued, roasted, and baked.

Drippings are just as advertised. They are fat that “dripped” from the process of roasting meat. The most popular drippings are beef and pork drippings.

At one point, drippings were once very popular in the British Isles but the health movement has made it a lot less popular as drippings were substituted with vegetable oils which were deemed as healthier.

Drippings were also used to cook British fish and chips in as much as beef tallow was once used to cook McDonald’s French fries. Just the same, they have been largely phased out in favor of vegetable oils.

Dripping sandwiches are snacks starting with d are made by spreading dripping in between two slices of bread.

Drippings can also be made into a cake when mixed with flour, raisins, spices, brown sugar, and currants. Dripping cakes are an English staple.

Vegetables that Starts with D 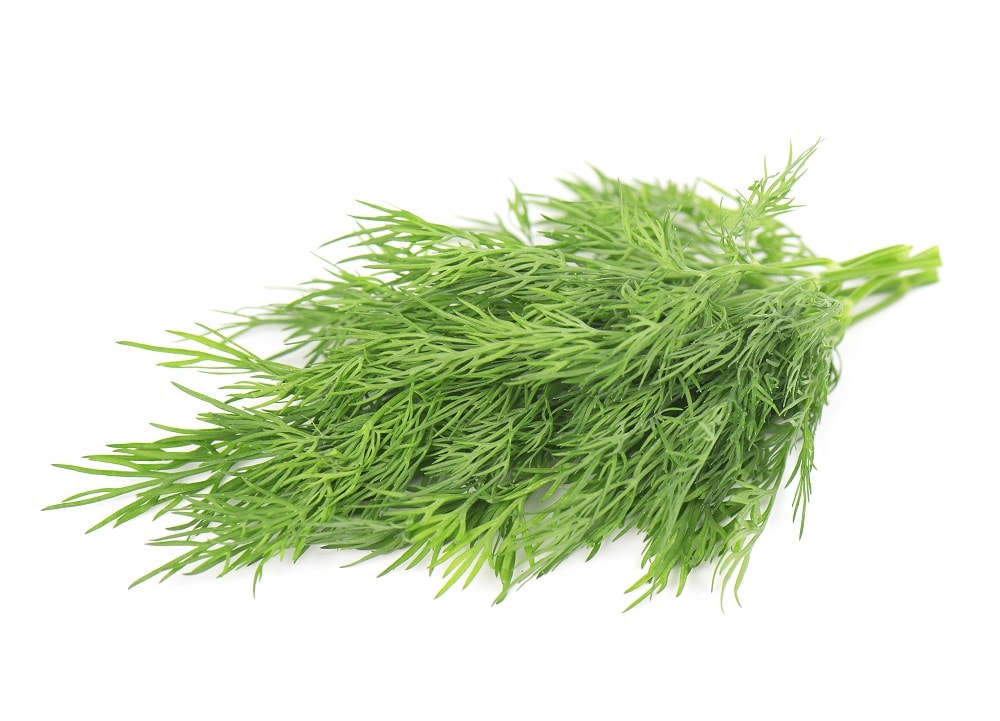 Dill has become popular due to the prevalence of dill pickles. Dill is part of what gives these pickled cucumbers their unique flavor.

Spices such as peppercorns, bay leaves, garlic, and horseradish can be added to further enhance the flavor of the dill pickles.

Pickles can be eaten as is or used to enhance the flavor of hamburgers, submarine sandwiches, and clubhouse sandwiches. They provide another flavor dimension to your favorite sandwiches.

Dill is actually part of the celery and parsley family and is likewise used as a garnish. It can be used to garnish soups, salads, meat, and fish. Dill is also used as an herb as a cure for ailing stomachs and as a breath freshener.

Dandelions are known for their yellow flowers and their ornamental value. What many do not know, however, is that dandelion greens and flowers are edible and have medicinal value. Dandelion greens are among the healthy foods that start with d.

Dandelions can be found in the United States, South America, Europe, India, New Zealand, and Australia.

Though many consider dandelions as weeds that must be eradicated at all costs, the dandelions were brought to America by the pilgrims as food and medicine. It has become a much-underappreciated plant in this respect.

As an added bonus, they also have electrolytes potassium and sodium.

Dandelion greens can be made into a tea. Tea is made by boiling two cups of dandelion parts with four cups of water. You then leave the tea to rest for three to twenty-four hours for the dandelion to be infused into the water. You then strain the dandelion parts and dilute the tea as needed. You can also mix in lemon, lime, sugar, honey, maple syrup, pumpkin spice, and milk to enhance the flavor of your tea.

Dessert that Starts with D 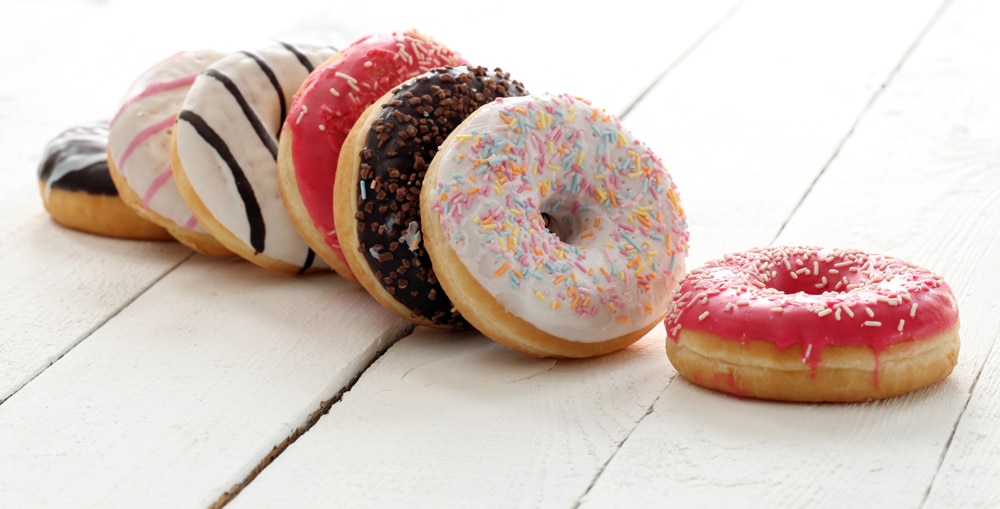 Doughnuts are among the most popular breakfast foods that start with d. This is due to its wide availability and low cost. They can also be used as a dessert as well due to their sweetness.

The base ingredients of a standard doughnut are sugar, flour, eggs, butter, and yeast. The mixture can be infused with a variety of ingredients such as milk, vanilla extract, chocolate, and cinnamon in order to add more flavor. Toppings can also vary. Glaze, frosting, chocolate chips, peanuts, strawberries, blueberries, sprinkles, and peanut butter are popular toppings. Doughnuts can also be filled with cream, peanut butter, chocolate, and fruit preserves.

Dark chocolate is something you may not like as a kid but you would appreciate it more as an adult. Kids would be drawn to the sweeter and milkier milk chocolate instead. The difference between the two is that milk chocolate contains less cocoa mass and contains more milk and sugar. Dark chocolate on the other hand only requires sugar, cocoa mass, and cocoa butter to be present. This makes dark chocolate bitter.

Among the best brands of dark chocolate bars are Hershey’s, Ghiradelli, Omnom, Dove, and Godiva.

Danishes are a pastry that came from Denmark. They are also called “Viennese bread.” It was brought to the United States by Danish immigrants.

Danishes are made from flour, milk, sugar, butter, yeast, eggs, and salt. This crisp pastry has multiple folding points and maybe topped or filled with apples, cinnamon, cheese, fruit preserves, squash, or bacon.

A dodger is basically a small oval-shaped cornbread based cake. It can be baked or fried.

While there is no standard recipe, you can use ingredients such as yellow cornmeal, eggs, salt, sugar, flour, baking soda, and buttermilk. Dodgers are popular in the southern part of the United States.

Divinity is known as the “southern candy” as it is popular in the southern part of the United States.

The candy started in the 1900s and It is suspected that it was created by the manufacturers of corn syrup as it has become a sugar substitute.

Ingredients of this confectionery may vary but one recipe includes pecans, egg whites, vanilla extract, light corn syrup, and water.

Drinks that start with D 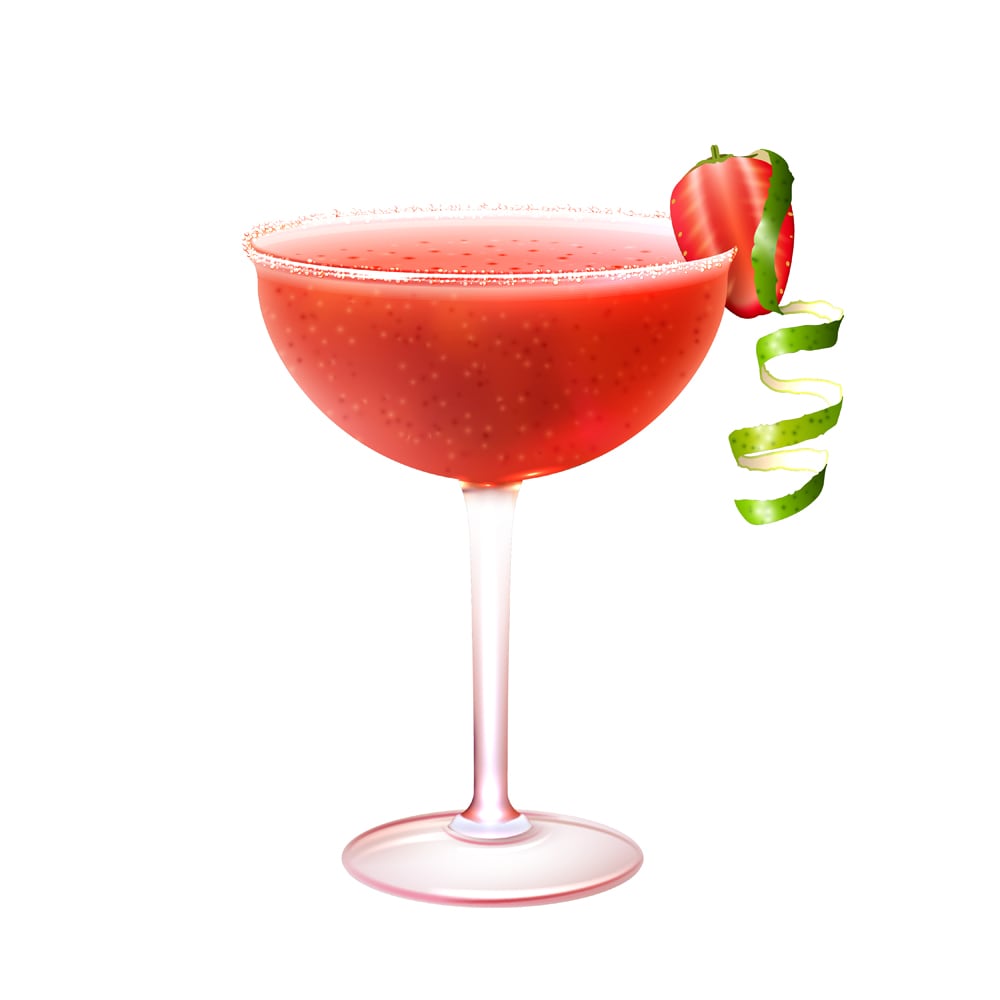 Jennings Cox, an American mining engineer, was credited for inventing the drink.
The basic version of the drink is very simple as it has only three ingredients – demerara sugar syrup, lime juice, and light rum.

It is then garnished with a lime twist. It can be enhanced by adding things like pureed strawberries, banana liqueur, or grapefruit juice. Famous people like President John F. Kennedy and author Ernest Hemingway loved the beverage.

Demerara sugar is a less refined type of cane that has larger crystals and has a more amber color. The syrup is made by combining sugar and water and heating it.

It was named after the colony of Demerara – a former Dutch and British colony.

Darb uses apricot liqueur as its main ingredient. It is then mixed with dry vermouth, lemon juice, and gin. The famous version of the drink was popularized by Patrick Gavin Duffy, the author of The Official Mixer’s Manual.

Daydream is a refreshing cocktail that combines the sweet and sour flavors of fruits.

It has a vodka base and contains orange juice, triple sec, and grenadine syrup. You may mix in pineapple juice or lemon liqueur for a more tropical feel. You may also use a citrus-flavored vodka.

The Deauville Cocktail was invented in New Orleans way back in 1930 and has been a party staple ever since.

It combines the fruity tastes of apple and citrus. You can create this beverage by mixing triple sec, brandy, lemon juice, and applejack.

Also Read : How Many Oz In A Quart – Complete Guide For Precise Measuring

Healthy foods that start with D 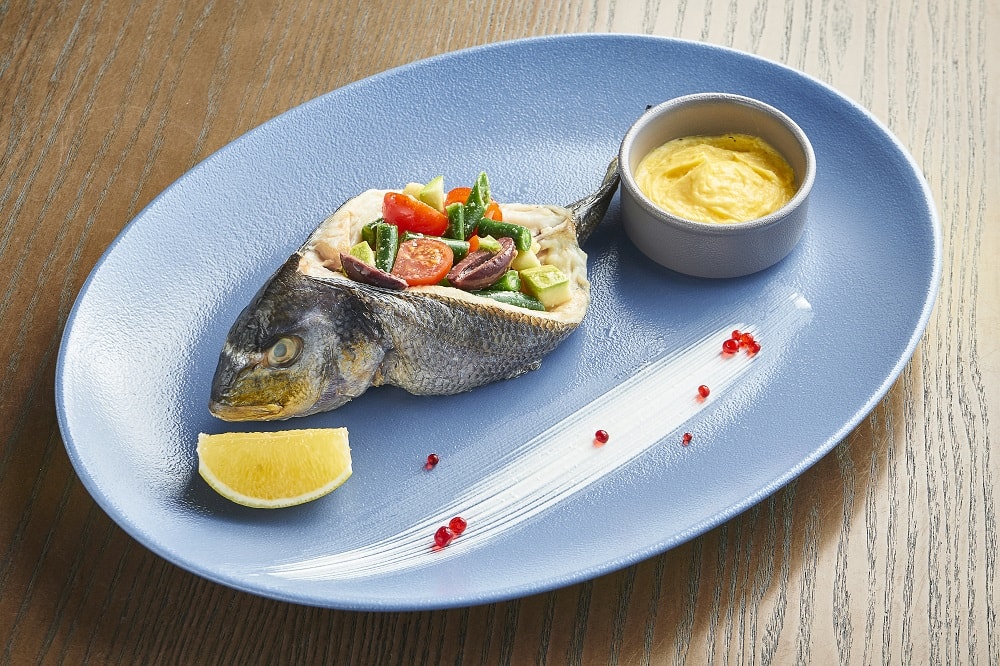 The word “dolma” comes from the Turkish word “dolmak” which means “to fill.” A version of dolmas involves grape leaves are stuffed with meat, rice, and herbs.

They also contain trace minerals such as calcium, iron, magnesium, manganese, copper, selenium, phosphorus, and iron. As an added bonus, they also have electrolytes potassium and sodium.

Dolphinfish is also known as mahi-mahi. Dolphinfish hare is known for its dorsal fin that almost extends from head to tail and its prominent foreheads.

They have skin that has yellow and blue tones and can range from 86 centimeters to 140 centimeters in length can weigh up to 22 kilos.

This fish is high in protein and omega-3 fatty acids and low in fat. It can be a good source of healthy protein and a meat substitute.

Foods that Start with d are comfort food that can brighten your day or a hearty meal that you will remember.

It is easy to take for granted how many of the foods we eat are foods beginning with d but there are a lot once you think about it.