Several people out there ask the question: do egg noodles have gluten? One thing is sure about egg noodles, and that is the fact that they taste incredible and are fun to create. The simplicity of the recipe gets challenged by the risk of gluten.

Egg noodles are very delicious and will trigger your appetite to want more. Their taste and texture make them the ideal side dish for you. Navigating the glutens world can be like walking through a minefield even though it shouldn’t be that way.

It would be best if you got it right with your egg noodles. This step may serve as the first step towards living a gluten-free life. The health implications of gluten consumption make this subject matter a timely one. For gluten intolerant people, the good side of eating noodles without gluten is that you will avoid the side effects of consuming gluten.

Why is Gluten Bad?

Glutens are bad because they can cause considerable damage to the health of whoever consumes them. it becomes worse for people with underlying health issues.

Glutens are inside grains such as barley, wheat, spelled, and rye and are used for binding food items together when being baked. Usually, they are found in items such as noodles and bread and gives them their characteristic elasticity. They are also found in many liquid-based consumables such as gravies and sauces because it helps thicken them. 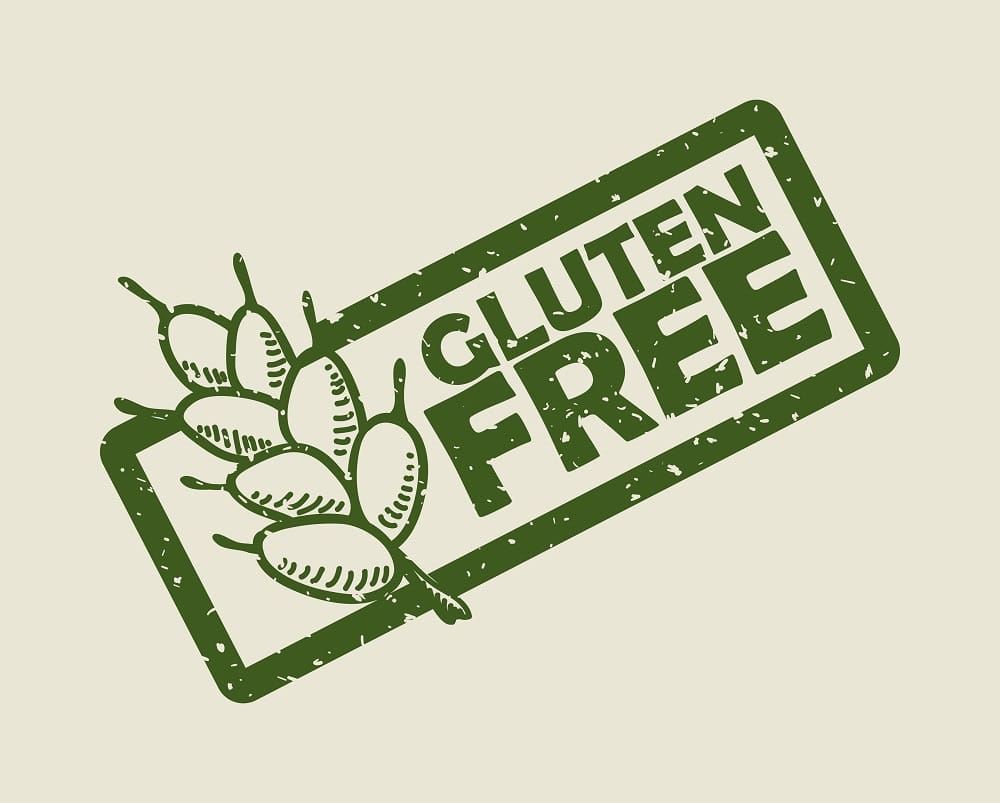 Adopting a gluten-free diet appears to be one of the biggest health trends of the past decade. However, there seems to be confusion regarding whether it is bad for everyone or just those who have some medical issues. One thing is certain, and that is the fact that some people have to stay away from gluten for health reasons. Some of the issues include intolerance, wheat allergy, and celiac diseases.

People who have been diagnosed with celiac disease or gluten intolerance should avoid gluten. Several people suffer from gluten-related conditions that cause discomfort, and unpleasant reactions against the immune system. Gluten intolerance refers to a situation where gluten proteins are viewed as foreign bodies when they gain access to the digestive system. This leads to an inflammatory reaction to resist them. Symptoms of this response include abdominal pains, nausea, bloating, and vomiting.

The intensity of the responses depends on the condition the person is suffering from.  And how reactive the gluten protein is. Some of the most common health linked issues from gluten include gluten intolerance, celiac disease, wheat allergy, and intolerance.

People suffering from gluten intolerance experience digestive discomfort which is characterized by abdominal discomfort. Some others experience gas, headache, fatigue, diarrhea, and anemia. With gluten-free noodles, you can avoid all these.

What is Egg Noodles Made of? 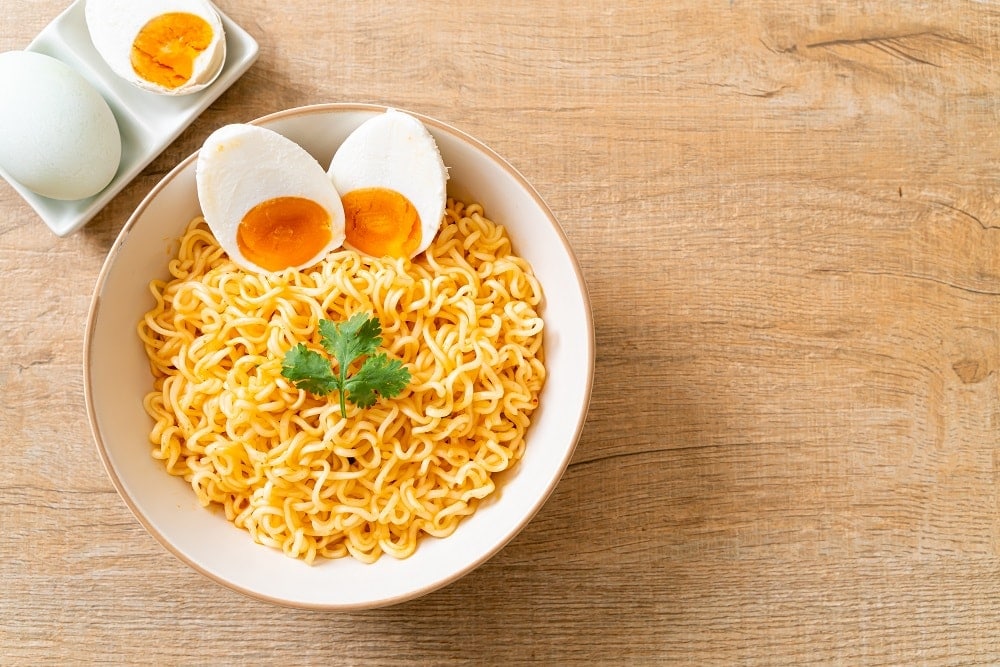 Egg noodles are a combination of salt, wheat flour, and whole eggs. There are different recipes for egg noodles and the volume of eggs used is dependent on the recipe you intend to use. Egg noodles are easy to make and are ideal for stroganoff, goulash, or in soups. Note that homemade egg noodles are very different from those that are store-bought. Usually, they are thicker and have a different texture. The difference that exists between egg noodles and regular pasta is the eggs.

Usually, egg noodles get made using a higher proportion of eggs to flour. Typical pasta on the other hand usually contains wheat flour, semolina, water, and a small ratio of the egg. Dried pasta bought in stores often does not have any egg.

Do Egg Noodles Have Gluten?

Gluten-free egg noodles are possible only if you use gluten-free flour. If you use flour that is store-bought, ensure to check the ingredients contained in the packaging just to confirm. On concerns about how healthy egg noodles are, they are almost the same as pasta, just that they have more eggs mixed in them. The egg content gives them their unique texture and allows the use of butter-based sauces. Egg noodles are generally lighter than pasta. Even though carbohydrates are a requirement for healthy living, eating too many of such puts you at risk of several health issues.

How to Make Egg Noodles 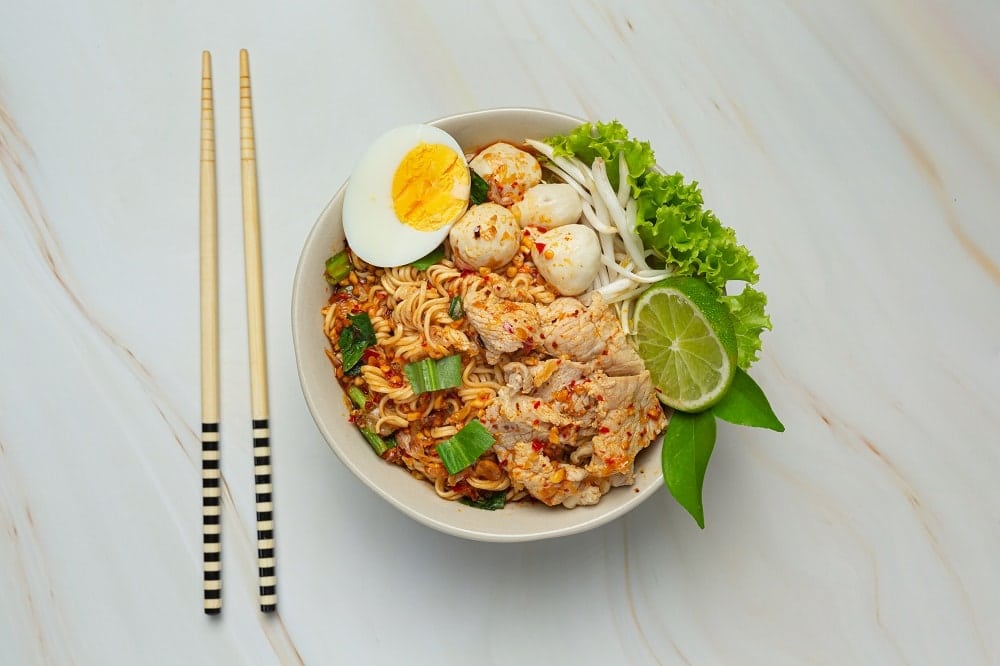 Egg noodles are easy to make and they get made of egg, flour, salt, and butter. Some may opt for whipped cream instead because they give a silky and creamy texture. To prepare, get a medium-sized bowl and mix the whipping cream, flour, eggs, and salt. With a fork, mix the dough until the point where they are well combined. In a situation where the though appears too sticky, add half a spoon of heavy whipping cream and knead it till it has combined. Remember that the dough ought to be sticky. But, it should be easy to pull apart from the side of the bowl.

When you observe that the dough is ready, add some flour to a flat surface and form the dough into a ball-like shape. Proceed to cover with flour to avoid sticking and start rolling it. When you are rolling the though, the thickness is dependent on how thick you want it to be. Once you have gotten the dough to take the form you want, cut them into the shape you desire. Boil the noodles for seven minutes and then your noodles are ready.

Serve the noodles using salt, butter, and pepper to bring out the unique taste and feel.

The health risks posed by gluten are such that necessitate making your foods to be gluten-free. But do egg noodles have gluten? Well, as long as the flour used contains gluten, the egg noodles will contain the same. The severity of the implications of gluten on your health hinges on the condition suffered. Gluten intolerance may surface later in life with minor symptoms. Celiac disease on the other hand is an auto-immune, life-long condition that leads to a more severe reaction that could damage the gut wall and lead to malnutrition.

It suffices to say that knowing how to prepare gluten-free noodles will be a big step towards attaining a healthy lifestyle.